Who is excited to witness the Rio Olympics 2016? Well, I think there are millions of people in this planet that look forward to witness this Summer event! For those new to this event, the Olympics 2016 will be held at the popular Rio de Janeiro, Brazil where you can find the popular “Christ the Redeemer” statue! This is also the very first Olympic Games ever held in a South American country.

Let us first check on what we can expect in the upcoming Olympic Games. 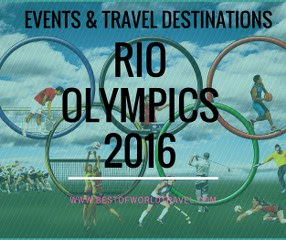 The Rio Olympic 2016 will be enjoyed from August 5-24, 2016. During those dates, the battle for the Olympic medals will be held into 32 different places.
This will surely push your traveller’s body to the limit!
Let us try to summarize some of the main events of the Olympic 2016 in Rio into four different regions. This is for us to travel across Rio with ease!
Inforgraphic of Rio Olympics 2016 Event Locations
(Full Photo here)

In this region, different games will be held. But the main event will be the opening Ceremony that will take place this Friday, August 5 in the Maracanã Stadium starting at 20:00 BRT (23:00 UTC). The event will have an estimate of three billion guests that will watch the show.
Several famous Brazilian singers, dancers and models will be part of the entrance ceremony to show their support in the Olympic Games 2016. Expect spectacular performances and visual effects to make your stay in Rio unforgettable!
Now, back into the games, we will be able to watch the fight in Archery and Athletics at Sambodromo. Another Athletics event will also be held at Joao Havelange Stadium. While the Volleyball will be held at Maracanazinho Arena.
Last but not the least, the most played game in the world, Soccer will be held at Marcanã Stadium which was built for the FIFA World Cup in 1950’s.

Side Travels in Maracana

Maracana’s main asset is the Marcana Stadium where the football event will be held. But why stay just inside the Marcana region encircled in the photo? There are several destinations that travelers can enjoy.
One of the next big thing near Maracana would be the Candelaria Church. This church was built and decorated from 1775 to the end of the 19th Century. A very long span of decorating and planning, eh? This church will surely be best for travelers that are attracted to the cultures of the country.
Museum of Tomorrow
Another is the Museu do Amanha a.k.a Museum of Tomorrow. Kids and Science lovers will surely jump in joy upon entering the museum. The museum houses several futuristic science exhibits. You can buy tickets online at MuseuDoAmaha.Org.
Advertisement

Our next stop is in the Deodoro, Rio where we can anticipate an outstanding performances from the atheltes with gladiatorial strengths!

Why gladiatorial strength? You ask?
Because in this region, the athletes will show their will power and ultimate strength in different extraneous games!
The Mountain Biking that will be held at Olympic Mountain Bike Park.
The Modern Pentathlon that consists of : fencing, 200m freestyle swimming, show jumping, and a final combined event of pistol shooting, and a 3200m cross-country run will surely make your heart stop! The event will be held at Deodoro Modern Pentathlon Park just across the Olympic Mountain Bike Park.
The next game will be to take down the enemies by Fencing at Deodoro Arena and Shooting game at National Shooting Center.
If you’re still hungry from the events above, you an enjoy the horse riders at National Equestrian Center that fight for the Equestrian Gold Medal.
If you’re into motorbikes and such, the BMX event will be held at Olympic BMX Center near the Shooting event!
Last but not the least are the warriors of the sea. The Kayak event and Canoeing will be held at Olympic Whitewater Stadium.

Side Travels in Deodoro

After a breathtaking view from the events above, you can now relax and try to visit other places before the day ends. In Deodoro, there are also lots of places where you can visit.
One of the notable travel destinations in Deodoro, Rio is a shopping mall. Yes, this time, it is your day to buy souvenirs at Guadalupe Shopping Mall. It is now your time to replenish your stocks after days of participation in the Summer Olympics 2016 in Rio.
Another travel destination in Deodoro would be the Parque Radical do Deodoro a.k.a X-Park. The park will be perfect for sight seeing and a little bit of water plays.

The next region will be the Barra, Rio de Janiero. In this region, the Rio Olympics 2016 will be showcasing most of the athletic events.
If you’re fond of Manny Pacquiao, the “pound for pound boxer”, then you already know that he will not be present in the boxing ring! But, the Boxing game itself will be held at Rio Centro. Together with other events such as Badminton, Table Tennis, and Weightlifting.
On the other hand, the Tennis event will be held at Olympic Tennis Center.  While you’re at it, you can also visit the Field Hockey at Olympic Hockey Center just near the Olympic Tennis Center and Rio Olympic Velodrome were the Bicycling event will be held.
If you’re into swimming, then the Olympic Aquatics Stadium will be your bet where the Swimming and Synch. Swimming will be held. While the Diving event and Water Polo will be fought at Maria Lenk Aquatic Center.
The Gymnastic athletes will be seen fighting for first place to represent their country in Olympics 2016 at Rio Olympic Arena.
The last couple of games are the Judo, Taekwondo, Karate, Wrestling and Handball will be held at Olympic Training Center. The third most favorite game in the world, Basketball will also take place in the same Training Center.

Side Travels in Barra Da Tijuca

Just like the Copacabana and Ipanema, the Barra da Tijuca also houses a huge amount of beach resorts. I guess, this Rio trip will make you a great swimmer?
Just a few feet from the beach, Barra also has a unique lake called Lagoa de Marapendi that sits across the whole Barra region. In this lake you can take a nature trip and have a little chat with your love ones. Other notable lakes are the Lagoa de Tijuca and Lagoa de Jacarepagua.
Also Read: How to Deal with Air Travel Issues

In this region we will see around seven games that will entertain us.
The Sailing event at Marina de Gloria. Just across it is the Flamengo Park where the Road Cycling and Marathon will be held. It is also near to Santos Dumont Airport.
If there are Indoor Volleybal games at Marcana, then in Copacabana we will experience to see the Beach Volleybal that will be held at Copacabana Stadium.
Another set of extreme marathon are the Triathlon and Swimming marathon at Fort Copacabana.
There will also be a set of Rowling and Canoe Sprint games at Lagoa Rodrigo de Frietas that makes the sixth and seventh game event that will be held at Copacabana.

Side Travels in Copacabana

The Copacabana, Rio is very famous in the world because of its exotic beaches that will surely make your jaw drop. Her beaches can stretch to a hundreds of thousands of feet in which accommodates a large amount of beach goers.
After a very tiring day of events, travelers can enjoy and relax at the Copacana beaches and play with the white sands.
The Rio Olympics 2016 guests can also visit the nearby city Ipanema which also harbors awesome beach that rivals the Copacabana. Ipanema also has an awesome nightlife and harbors one of the finest hotels.

Rio de Janeiro is a very big place where the Rio Olympics 2016 will be held. She will not just show you the brutal battle of athletes that compete for their country, but she can also show you the beauty herself. Rio de Janiero houses several known and unknown travel locations that makes her one of the best travel destinations in the world.