People from all over the world enjoy getting a break from their daily routine and one of their way to do so is to travel, to become “nomads”. However, the way that people travel differs quite a bit from one country to the next. This is influenced by many factors, including language, culture and economics. Let’s look at how several different culture and races travel nowadays. 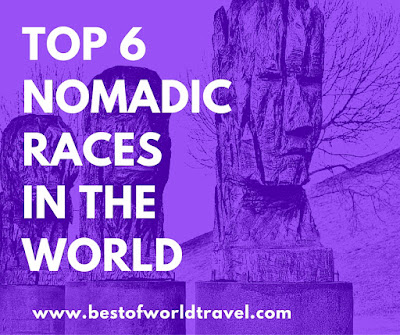 In this article, we will show you a little heads up on the top 6 races that ravels a lot. But actually, they are the top 10’s if they are categorized by their country.

For Canadians, the most popular destination when going abroad is the United States. In 2013, Canadians were more than 20 times more likely to visit the U.S. than any other country. It could be the geographical location which is just beside the country.

The next most popular destinations were the United Kingdom and France. These numbers are not too surprising when we consider factors such as distance, culture and language. Fourth on the list, however, is China, which may reflect the large number of Chinese immigrants who now live in Canada.

Hong Kong travellers are also one of the nomadic races in the world. Actually, these Hong Kong Chinese rank as top 6 in the biggest travellers on Earth. Hong Kong itself is a small country compared to others which result in a lower domestic travels, with an average of 0.3 travel times a year. But this also contributed to boost their affection to visit other countries that made them one in the top. Hong Kong travellers has an average of 4.3 times outbound travels per year.

Also Read: Earn up to 50% Off Your Flights and Hotels as a Mystery Shopper

If Hong Kong travellers do not explore a lot in their own country, the New Zealanders are the opposite. This explorer race also ranks as the Top 6 world travellers just like the Hong Kongers, but they excel in their domestic vacation, yes– the opposite.
Also Read: Air New Zealand is the Best Airline!
Even a lot of races in the world are stunned by the beauty of the New Zealand. Here, you can find the colourful waterfall and rivers, gorgeous natural landscapes, beautiful wild animals and more. In this country, the Zealanders doesn’t need to go to other places in order to experience unforgettable bucket lists. The New Zealand is a country where the residents are bound to her natural beauty.

Americans enjoy travel, but they don’t actually go abroad as much as people from many other countries. PsychologyToday identified several reasons why this may be so. For one thing, Americans get less vacation time than most Europeans, Canadians and Australians. The U.S., in fact, is one of the few industrialized countries where employers are not mandated to provide employees with a certain number of vacation days.
This tendency of Americans to stay at home, however, may be changing. The U.S. Department of Commerce reported that, in 2014, a record number of Americans travelled abroad. However, these statistics reveal that 55 percent of these travellers did not leave their own continent, sticking to Mexico and Canada. Most of the remainder went to Europe. The most popular destination, by far, for American travellers is Mexico. In addition to being close, the value of the American dollar is currently quite strong relative to the Mexican Peso, which may be a factor in motivating these trips.

Australians are famous for being avid world travellers. Even though their nation is quite a distance from most destinations, Australians enjoy exploring the world. According to the Australian Bureau of Statistics, there were 33.9 million border crossings, which comes to an average of more than one for each citizen.
There are several reasons why Australians do so much traveling. One is that the average employee gets a minimum of four weeks’ vacation per year. Another is that travel is a fundamental aspect of Australian culture. In 2015, the top five travel destinations for Australians were Japan, New York, Bali, Singapore and Hawaii. The recent weakening of the Australian dollar may cause some cutting back of international travel. However, Australians have such a strong penchant for globetrotting that it’s likely Aussies will find a way to keep traveling regardless of economic conditions.
Also Read: 10 Accessories a Nomadic Should Bring

Scandinavians are among the well-travelled people on the planet. A survey by Timetric revealed that, in 2015, Finland was the world’s most well-travelled country, with the average Finn travelling 7.5 times per year. Also in the top five were Sweden, Norway and Denmark. In short, it’s some of the Europeans.
Scandinavians enjoy traveling both domestically and internationally. One reason for this is the prosperity of Scandinavian countries. Another is that the experience of harsh winters and very long winter nights. These give residents a strong motive to travel during the cold and dark months. This is probably why Finns enjoy traveling to Mediterranean countries where they can enjoy the sun’s heat.

It’s interesting to contrast the travel customs of different cultures. Americans, and New Zealanders for example, enjoy traveling but mostly stay within their own borders. Australians and Scandinavians travel widely both domestically and abroad. Canadians and Hong Kongers, meanwhile, have a fondness for traveling to their neighbour to the South. Travel habits may change over time, but we can discern certain long term travel preferences exhibited by people of different cultures. Some travel reasons are bound from the difference of the climate such as the reasons of the Scandinavians which travel most at winter days. The travel habits of different races in the world widely differs from many aspects such as geographical locations, weather and cultural habits.
Guest Post by: Bill Gordon