Nowadays, action cameras seemed to pretty much common in the world, that’s all thanks to GoPro that sparked their creation when they wanted to film their surfing experiences. Despite being very popular, there are numerous products from other companies that rival them in the market. We can name some products such as the Kodak’s Sixpro, Polariod’s Cube and Sony’s POV Action Camera. There are also the SJCAM Series that almost has the same design as GoPros, but much much cheaper. And now, we proudly present to you the Cherry Mobile of the Philippines’ “world’s first SMART action camera that runs in Android Lollipop 5.1”, the Cherry Mobile Explorer 2. 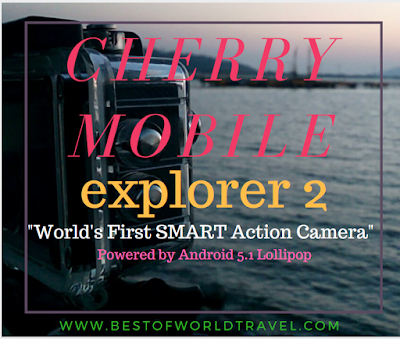 The company Cherry Mobile is one of the leading local android phone manufacturers in the Philippines, they are very popular due to their low price with high specs that can even rival other international companies.

I first heard these two action cameras when I was in Green Hills Mall in Manila, the Cherry girl gave me their newest flyers and it instantaneously sparked my interest. My senses tingled when I saw an action cam in the flyer. “Could it be a revolution in Philippine’s action camera?”
Now, let us discuss about the Cherry Mobile’s Explorer 2.

Cherry Mobile Explorer 2’s seems to have a sleek design compared to other action cameras that are available in the Philippines. And I think it has a better design compared to SJCAM series. It’s metallic grey color adds up to her beauty that makes me wonder how cool is it to have her! She obviously have a built in monitor to maximize the power of Android 5.1.
The action camera has Gold, black, blue and red metallic variations so that consumers can freely choose what is best suited in their personality. 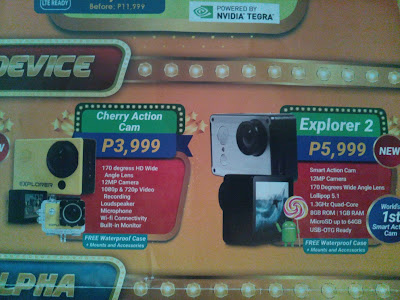 The action camera boasts its 170 degrees wide angle lens, and it seems to be somewhat the same as the other action camera lenses. Further details about this product’s lens will be enlightened to us in the near future.
A 170 deg wide angle is actually quite nice as a lens for an action camera since it can almost get a clear and wide shot in your awesome adventures, but of course in a fish eye lens.
The camera also has a 12 Mega Pixel lens just like the Hero 4 Black, Silver and SJCAM SJ400 Wifi. But these action cameras just do not compete with how big their “mega pixels” are, but the quality of the lens.

If we are talking about a 12MP camera, then maybe we can show you our SJCAM SJ400WiFi’s  quality?

Both were taken at Treasure Island Resort. The first photo is x1 zoom with automatic ISO and factory settings taken from a considerable amount of light. And I repeat, from a SJCAM SJ400 Camera.

The second photo pertains the SJCAM’s x4 Zoom with almost the same settings as above.

Did you not like the zoom function? I didn’t also!

This photo was taken at Ocean Adventure Subic. This shot is showing you how well a 13MP camera from Cherry Mobile works if it’s focus is a few meters away.

On the other hand, this photo clearly shows how well a 13MP lens of a Cherry Mobile product does its job in a point blank range shot. This photo was taken at Fortune HK Seafood Restaurant.

Since the Explorer 2 just came out from the market a few weeks ago, our insigthes regarding this product is still unclear. But if we will compare the photos above to the real photo of a Cherry Mobile Explorer 2 which can be found here made by unbox.ph. The link contains the initial review of Unbox.ph together with photos and videos.

Just what they said, “The world’s first SMART action camera”, the Cherry Mobile’s Explorer 2 runs in an Android operating system, the Android 5.1 Lollipop. Just how awesome is that?
It really gave me a big “WHAT!?” when I first heard about this camera, since even the GoPros and other high end action camera manufacturers are yet to release this kind of operating system.
Since it is our very first time to hear this kind of system in an action camera we are still puzzled on what will be the power of Explorer 2 in the market.
Can we use it to play games? Are we allowed to hook it up to our emails or the Play Store? Can we literally hook it up to our android and iOS devices easily just like how smart watches work? Since she has a 8GB ROM and 1GB RAM and MediaTek’s MT6580 1.3GHz processor , can we use it just like a regular cellphone? Calls, SMS, browsers and so on?
According to unbox.ph, the camera seems to be able to connect to WiFi hotspots and has the ability to upload your photos and videos…. right away! But, there are some drawback such as having a hard time to type passwords of wifi since the monitor is just 2.4 inch touchscreen.

You can also install apps and watch videos online as long as there is a WiFi connection, but will the small monitor fulfill your needs?

And no, you can not insert a SIM card.

In our observation, the Smart Action Camera has almost the same accessories just like the GoPros and SJCAMs. She also has a waterproof case and other stands (which is included when you buy it). I am betting that the accessories of both GoPro and SJCAMs can also be used in this device, well… they alsmost have the same appearance!

While it is our very first time to hear the “world’s first smart action camera” since no one has actually made it, we should not judge it without actually seeing and using it in our personal travels. The “smart action camera” is actually a great idea to revolutionize the camera market in the Philippines, or in the world. Although the specs of the product seems to match its very low price in the market, then the outcome of the photos and videos may also be different compared to GoPros and other popular cameras. One great feature of this camera is to instantly upload your photos, connect to internet and install apps. Will we buy it? The specs seems good, and the company has a reputation that she built, it’s cheap and affordable, so maybe.
*Disclaimer: The Best of World Travel is not affiliated to Cherry Mobile company, but it did not change our opinions regarding this post.